A Brief History of the Rolex Day-Date AKA "The President"

In 1956, Rolex released the Day-Date: a new line of premium timepieces that would occupy the flagship spot within their growing catalog. Building off of the basic design of their existing Datejust line of watches, the Day-Date added an additional complication for displaying the day of the week through a second aperture in the surface of the dial.

Over the years, the Rolex Day-Date has become synonymous with success and accomplishment, and various examples of this iconic watch have graced the wrists of everyone from musicians and professional athletes to United States Presidents. 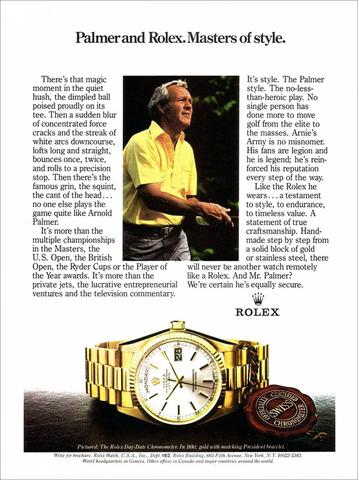 The Rolex Day-Date holds the title of being the world’s first watch to display both the date and the day of the week (spelled out in full), through separate windows in the surface of the dial. As Rolex’s new premier timepiece offering, the Day-Date was (and still is) only ever crafted from either solid, 18-karat gold or 950 platinum. There are only six known instances of a Rolex Day-Date being manufactured from stainless steel. All six examples are reference 6611 Day-Date watches that were created during a very short period of time while Rolex was experimenting with the idea of offering an entry-level version of the Day-Date. The idea was ultimately abandoned and production of stainless steel Day-Date watches stopped after a series of marketing tests revealed the potential demand for gold timepieces.

Similar to how the Jubilee bracelet was designed specifically for the 1945 release of the Datejust, the President bracelet was created specifically for the Day-Date and was first unveiled to the public in 1956. Much like the Day-Date watch itself, the President bracelet is only ever manufactured from either 18-karat gold (yellow, white, or pink) or 950 platinum, and it is reserved exclusively for Rolex’s Day-Date line of watches, and certain precious metal variants of the Datejust. 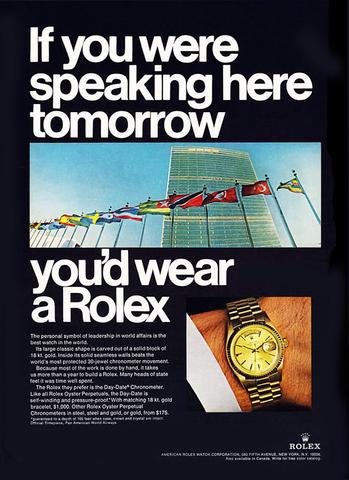 While the “Rolex President” name has now become synonymous with the Day-Date line of watches, this naming convention has not always been in place. Rolex’s connection to the White House began even before the introduction of the Day-Date. In 1950 the watchmaker gifted General Eisenhower an 18K gold DateJust. The gift was to mark the production of the 150,000th chronometer by Rolex (they had gifted the 100,000th to Churchill) and was engraved with the general’s initials and the date 12-19-50.   Eisenhower famously wore the watch on the cover of Life Magazine in 1952 and throughout his presidency making him the first United States President to wear a Rolex. 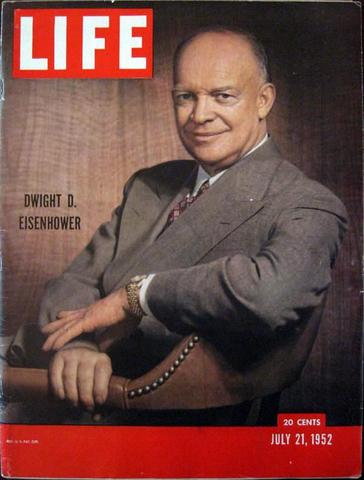 It was not until the mid-1960s, nearly 10 years after its initial introduction, that the Day-Date officially received its now legendary nickname. Then-president Lyndon Johnson had been frequently seen wearing his 18k gold Day-Date and in 1966 Rolex released a U.S. magazine ad referring to the Day-Date as “the presidents’ watch.” In modern Rolex terminology, the “President” name actually only pertains to the semi-circular, three-piece link bracelet found on the Day-Date; however the “Rolex President” name stuck, and it is now frequently used for any Day-Date watch, regardless of the style of bracelet fitted to it.

It is no surprise the President nickname has remained prevalent. Along with Johnson, Presidents Kennedy, Ford, Reagan, Nixon, and Roosevelt, all wore the Rolex Day-Datemodel.  Kennedy’s was a bit of a scandal.  A gift from Marilyn Monroe, reportedly given on the night she sang “Happy Birthday Mr. President” to him at Madison Square Garden, the back was inscribed “JACK with love as always from MARILYN May 29th, 1962.” Kennedy allegedly told an aide to get rid of it, but it appeared at auction in 2005 and was sold to an anonymous bidder for $120,000. 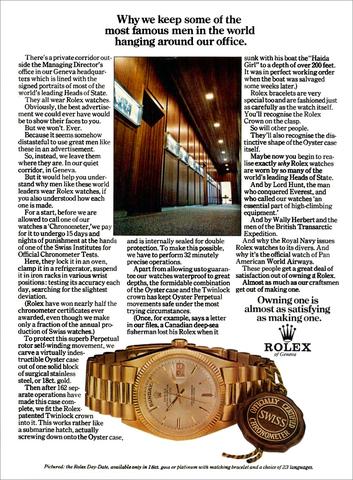 The 1800-generation of Day-Date timepieces was based on Rolex’s new 15xx-series of movements, and significantly improved the overall reliability and performance of their flagship Day-Date line. Rolex manufactured 1800-series Day-Date watches with a number of the different dial, bezel, and bracelet configurations, and the 1800-series remained in production for nearly two decades until Rolex finally replaced it in 1978 with the introduction of the 18000-series.

The new 18000-generation of Day-Date watches marks a turning point in the Rolex President’s history, where the iconic watch first began to take its contemporary form. The 18000-series Day-Date timepieces were built around Rolex’s new caliber 3055 movement, which added a quick-set date feature to the already successful, flagship line of Rolex timepieces. Additionally, along with the new movement, came a scratch-resistant, synthetic sapphire crystal and a dial with an entirely flat surface, rather than a “pie pan” dial like its predecessors, which had downward-sloping outer edges. Despite remaining in continuous production for well over sixty years, the overall appearance of the 36 mm version of the Rolex Day-Date has remained remarkably unchanged since its original introduction in 1956 – and for good reason too. The classic appearance of the Rolex President, and its iconic, three-piece, semi-circular link bracelet has quite literally never gone out of style since it was first unveiled to the public. Throughout the years, the Rolex Day-Date President has grown in both popularity and price, and Rolex’s premium flagship offering has become an internationally recognized symbol of success and personal accomplishment.